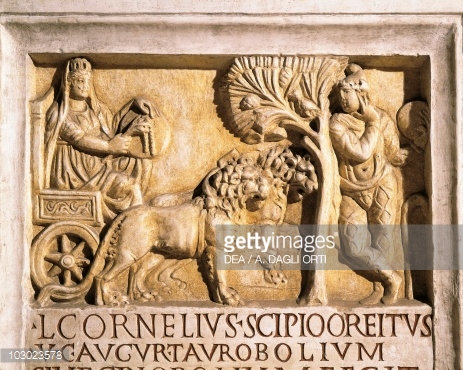 Cybele was a goddess who caught Zeus’ eye (bugger can’t go a day, ask Hera). She said no so he did an end run around her wishes. (Yeah I know, he’s like that, dangerous predator thing). Became a tree, she ate from the tree and there was a child.
Cybele gave birth to an unholy child, from the unholy union. a demon named Agdistis. The other gods wanted to control this demon so they cut off his penis. The blood became an almond tree.
And along came the river’s daughter Nana, who ate an almond and oops she got pregnant.
Along came her son Attis. She was having none of that so she “exposed” the baby (left him out to die). Shepherds came by and took the baby and raised him.
Grandchild of a god and goddess, child of a demon and a goddess. Yeah this kid had a good start.

So years go by and Attis lives his life till one day Cybele sees him and falls in lust with him. He’s having none of that. He has his eye on a girl. Cybele got so jealous, she drove Attis mad and chased him. He became so desperate, he castrated himself then committed suicide.
Cybele went running to Zeus who helped her raise Attis from the dead. Obsessive grandma much?

Every year, the priests of Cybele’s temple held rites where they were emasculated in order to raise Attis’ spirit for Cybele. Attis was mourned for three days then Cybele raised him again. Poor Attis huh?

And that dear folks leads us to the marriage of Cybele. The all powerful earth mother and the castrated supplicant.

Carly Simon – You Belong to Me
https://youtu.be/S6BalhjGfjM

The Police – Every Breath You Take
https://youtu.be/OMOGaugKpzs

I can do anything with it I please.
If I choose to put it in a cage and tease you or leave you to go putrid, I can. If I want to lop it off and make you my eunuch priest, I can.
I can have you lay by and watch as I have lovers. I could have you be intimate with men in my name too.
My friends who express interest in you may have you for sexual services. Or I could milk your semen if we consider you worthy of our breeding program.
I could turn you into a gurl and have you live as my sissy. To be used by my lovers and I as a gurl. Or my friends and I could have hen parties where you serve our needs, as naked as you can be.
We could make you shame yourself or we could shame you, by calling you names and using you as our toilet.
Oh this is going to be fun for me…

CFNM
He was sashayed around the group of us and his parts were teased mercilessly, his butt was slapped. He was tripped so we could giggle over the pratfalls.
He was sent running for anything we wanted.

The Pet
He was ordered to his hands and knees and made to beg and bark for treats. He was given a bowl to lap from and the ladies enjoyed his wagging tail and his kisses.

The Sissy
We had him strip and bathed so we could begin his transformation. He was corseted, put into stockings and heels and tap pants first. Then we did his face after shaving him. My what a pretty gurl indeed. A few of my friends were a bit jealous when he looked better than them. Then we found a french maid’s outfit and the transformation was complete.

The Human Toilet
The ladies had a chance to say goodbye by using him as their toilet. Thank goodness for that drain… (whew!!)

As beauteous as he had looked as a gurl, he was stunning in supplicant robes. His face was shining and he seemed thrilled beyond measure. The priestess took him through the steps of his initiation into the temple. And he was made one with the goddess. I was so proud, I had trained him well.
Today he became worthy of more than just a toy we could play with at the hen party. When the temple was done training him, he would be worthy of being my mate. I hoped he succeeded.
Not that his life would change much…
He would still be mine, to do with as I wished.
He bowed, he crawled. He was kicked and bled. A knife was held to his throat and his genitals and a token bleed was asked and given.
He offered his service to the goddess and it was accepted. Thank the goddess!! It was done.

We are gathered here to give this man to this woman in service.
He will obey at all costs.
He will cherish and serve her till she is satisfied.
He will be her guardian slave,
her servant
and her blooded husband.
In the name of Cybele,
so she says so shall it be.

And the party began. He was led about naked for everyone to greet and meet. I was pleased that he had behaved as directed. Now I could relax and enjoy the celebration.